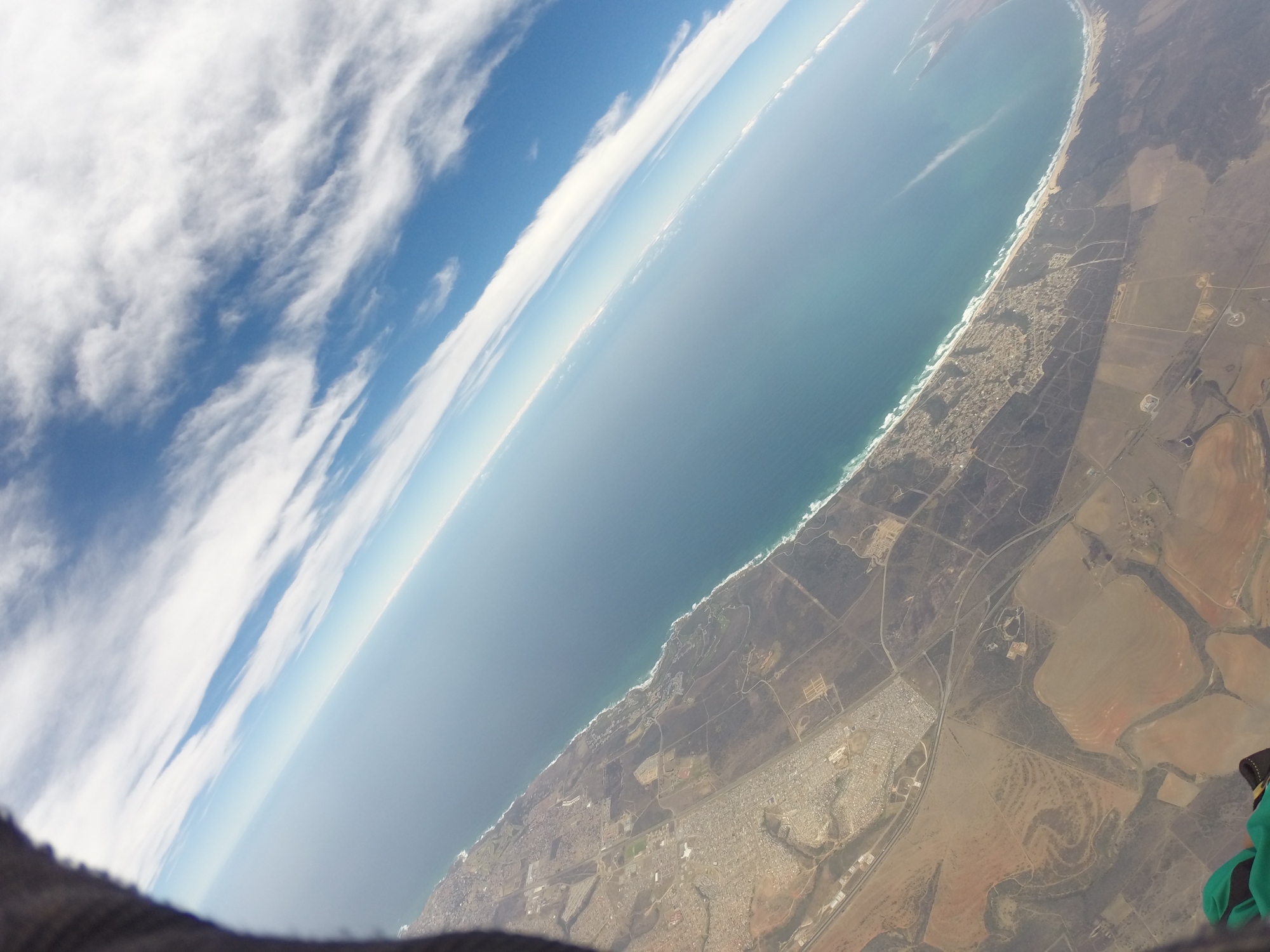 Right since childhood I loved the little rides that made me a bit dizzy. Whether it be the giant wheel or the twisting, turning dragon-coaster, I loved the adrenaline rush and the light headedness after.

So when me and my husband got to know that people skydive in Mossel Bay, South Africa, where we were heading for our honeymoon, I was up for it. I thought that it will be like one of those free-fall rides you have in the amusement parks.

But as the day approached, I started getting way damn nervous. The idea of jumping out of the plane and freely falling for half a minute made my stomach churn. Scary thoughts like will the parachute open on time, will I just faint in the middle of the sky or will the instructor somehow get detached from me, started making me too worried about the dive.

Finally the Day had arrived. We had booked our slot for 9 am and truthfully speaking, I just wanted it to get over fast. My husband was very supportive and calmed me down by playing some nice music too. Unfortunately the skies were too cloudy that morning and we were told that the sky-dive had to be postponed. So we sat there waiting for the skies to clear up, and had a light brunch in the meantime.

Around 2 in the afternoon, the skies were bright, clear and sunny and we were ready for the dive.We drove to the private skydiving bay. We filled up the necessary forms, got into our suits and waited for the instructions. Just before our slot, a couple had already done their dive. Once in the suit, resting on the sofa at the waiting area, I did not feel as nervous as before and was quite ready for the flight and dive.

The plane arrived. It was a small 4 seater and me, my instructor, my husband and his entered it. It revved up the engines and started on the runway. I was really excited and slightly nervous at that time but my instructor was so enthusiastic and happy that my worries vanished. While sat in the plane, he gave come instructions regarding the position we had to achieve after the jump. All I remember him saying was “Go be a banana”. 🙂

At last, the plane took off. As the door was open and I was the first to jump out, I could see everything below. The wind was too loud, but the scene of the land and sea below was the best sight I had ever seen in my life. It was as if I was a part of the Planet Earth documentary, the one where they take shots of earth from up above. Just the landscape sights were worth what we had paid for. All the while, I was almost half out of the plane, with only my instructor’s leg keeping me from falling out.

We achieved the altitude of 10,000 ft after about 10 min and we were ready to jump. I frankly wanted to jump out of the plane and just let go. I waited for the instruction and the he said “Jump” and i jumped….

The first sec off the plane was pure adrenaline rush. I immediately folded by legs like a banana and hung onto the suit like my life depended on it :D. My stomach fell a bit (felt just like going down sat in a rollercoaster) but just for a second. The wind hit us so hard that I could not close my mouth all through the free fall and was left with a funny smiling face throughout. I spread my arms out like instructed and fell through the sky.

The 40 sec free fall was soon over and my instructor opened up the parachute. At that moment the Earth seemed to stop suddenly. We were falling so fast with so much wind blasting on us, and suddenly everything was still and we stopped in the middle of the sky. Our parachute stabilised and for the next 5 min we soared through the skies enjoying all the sights of the sea below.

Words aren’t enough to describe what I felt and saw during that time but here are a few pics to give you some idea.

I felt as if I was flying.

As we approached the ground, I lifted my legs up and made a clean landing on the bum. I was still shivering from all the excitement and so very happy about the whole experience. My immediate reaction was that I should do this more.

I look forward to many more such adventures with my husband. 🙂